Recognition and rewards programs have long been used to entice people into stretching themselves and delivering more than expected. A lot of recognition programs are still variants of the ‘carrot and stick’ policy, which claims to provide ‘juicy carrots’ to people who are motivated and performing and ‘hard sticks’ to those who slack off.

There is a business case for recognition and a Deloitte study indicates that organizations that have recognition programs have 14% higher engagement, productivity and performance. And this has clear profitability impact because a 15% improvement in engagement is linked to a 2% increase in profit margins.

1. Expectation leads to entitlement – Whatever is expected eventually becomes an entitlement and is not appreciated. Instead of feeling recognized and special, employees start expecting to be recognized all the time, and get disappointed when they are not. Therefore, the element of surprise can be engaging for employees. Initially, to build a habit, recognition can be provided each time a desirable behavior is observed. However, to prevent it from becoming an entitlement, the schedule of recognition can be varied after a few times.

2. ‘Too little, too late’ can be demotivating instead of rewarding – Recognition loses its impact if it takes too long to arrive. Immediately after a great contribution, when an employee is feeling enthusiastic and positive, it is the right time to recognize them and influence future behavior as well. Most recognition initiatives can be staggered throughout the year, instead of annual or six-monthly schedules. It also helps to make some of the awards more random and ad hoc.

3. Sycophancy and ‘hero worship’ takes place if only leaders manage the recognition – If recognition is provided only by leaders, it opens the door to disengagement, bias and loss of momentum. People crave recognition and respect from their peers and subordinates as well and look for opportunities to be seen as experts and high performers by their peer group.

4. Monetary recognition can sometimes be demeaning – Research indicates that less than 10% employees desire tangible rewards as the primary form of recognition. Social recognition is much more powerful and employees seem to be gravitating towards something that improves their social standing, and is more personalized. Money is important, but it is not the only thing that unlocks performance.

5. Raffles are terrible and satisfy no one except a handful of winners – ‘Raffles’ are the best way to upset large masses of people. All the people left out in the ‘raffle’ system feel undervalued and disgruntled. Without handing out recognition to every single person, it is possible to recognize people not only for great outcomes but also for displaying the right behaviors in trying to do so.

To keep your recognition program from becoming yet another ‘run of the mill’ initiative that brings more brickbats than bouquets, ensure that you keep it updated. There is no one better than your target audience – the employees themselves to comment on what works for them. Keep asking people what would motivate them to bring in their best selves each day and help recognize the right behaviors for the same.

Differentiated recognition programs can lead your organization into the future. Are you ready?

WE ARE HERE FOR YOU!

Ask us a question

Tell us what you think

We want to hear from you

Thanks for your interest in CompTeam. We will get back to you right away. 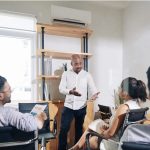 Enabling Your People to ‘Own’ Their DevelopmentEmployee Retention, Read Articles, Systems Solutions